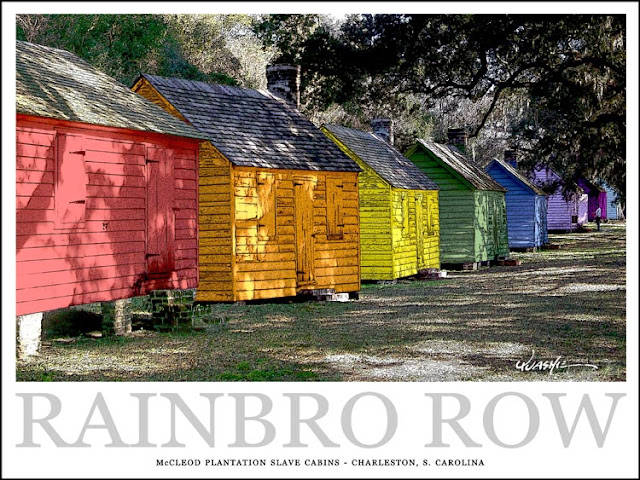 If you don't live in Charleston, S Carolina, or have never visited, then this probably doesn't make much sense. It is a cynical take on one of Charleston's most popular and photographed tourist attraction - Rainbow Row.

Rainbow Row is the name for a series of colorful historic houses located north of Tradd St. and south of Elliot St. on East Bay Street just before you hit High Battery. It is referred to as Rainbow Row for the pastel colors used to paint all of the houses. They exemplify everything that Charleston seems to sweat profusely - history, charm, nostalgia, etc., you get the picture. It is an assured stop on the carriage rides.

A little history on the non-historic (via Wikipedia). After the Civil War, this area of Charleston devolved into near slum conditions. In the early 1900s, Dorothy Porcher Legge purchased a section of these houses numbering 99 through 101 East Bay and began to renovate them. She chose to paint these houses pink based on a colonial Caribbean color scheme. Other owners and future owners followed suit, creating the "rainbow" of pastel colors present today.


Common myths concerning Charleston include variants on the reasons for the paint colors. According to some tales, the houses were painted in the various colors such that the intoxicated sailors coming in from port could remember which houses they were to bunk in. In other versions, the colors of the buildings date from their use as stores; the colors were used so that owners could tell illiterate slaves which building to go to for shopping (nice one, huh?).

Perhaps the second most photographed attraction in the Charleston area are the plantations, notably, Magnolia and Boone Hall. The grandeur of those places totally overshadow the squalid little huts known as slave cabins. In fine 'Plantation series' form, I decided that the slave cabins needed to be seen as equally as charming, so through the magic of Photoshop, I added an extra cabin to close the ranks and 'painted' the slave cabins behind the McLeod Plantation (originally whitewashed) in bright rainbow colors. Considering the original Rainbow Row has no real historic value and the slave cabins do, why not leverage the visual value of the valueless to make relevant the truly deserving?

I ought to have T-Shirts made of these.

Posted by COLIN QUASHIE ART at 2:09 AM