Tom Starland and the fine folks over at Carolina Arts graciously placed my art on the cover of their April issue. The magazine used to be a hard copy about a year ago but transitioned into digital 'print' and now can only be downloaded. It seems that the recent issue has seen the most downloads to date. Tom speculates on the reasons on his latest blog post:

At the first of the year I stated that I was finished with giving monthly reports on how the paper was doing as far as downloads go – once as a first ten day report and than again at the end of the month. And it’s been great reporting in my commentary in the paper that ever since the Dec. 2011 issue we have been seeing over 80,000 downloads a month.

But now, we reached a new level that I think deserves reporting – mostly because so many people are responsible in helping distribute this paper by forwarding on my monthly notice that the paper is ready to be downloaded to their friends and contacts by e-mail. I’ve described this process compared to me throwing a stone into a body of water and as that wave from that stone reaches others around the Carolina visual art community they throw a stone which reaches others who repeat the process. It’s a process where many waves are heading in all directions. Those waves are most active in the first ten days of the month. Sometimes a few stones are thrown later in the month and a few might get tossed near the end of the month. But, the bulk of the downloads each month come in the first ten days of the month.

I want to thank all those folks who are part of that process and hope they keep it up each month. Because of you I can report that in the first nine days of April there have been 90,126 downloads of the April 2012 issue of Carolina Arts – amazing!!! I couldn’t wait for the results of day ten to tell you this news.

Up to this point our largest number of downloads for an issue came is Jan. 2012 with 84,244 downloads. I was thinking that with that number coming in January we could slowly climb higher and higher by May and June, but February and March saw a slight dip – still over 80,000, but not climbing.

Out of the blue, our April issue became our largest issue to date with 79 pages and we made the decision to go back and rerun an article about an exhibit by Colin Quashie that we included in our March issue, but this time feature his works on our cover and a few pages inside the paper – at a larger size than usual. We can’t tell if it was the bigger issue or Quashie’s images that drew so much more attention to the paper, but we’re very glad to see these numbers. But, it’s my guess that the images had a lot to do with it. 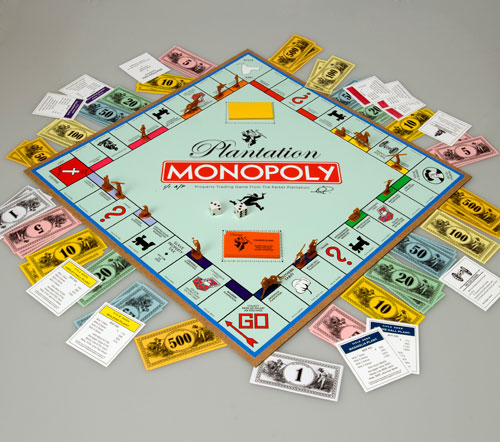 Plantation Monopoly (Entire Game) by Colin Quashie, 20” x 20”, Print on Masonite Board. Photo by Rick Rhodes.
There’s no telling what the end of the month will bring. The downloads could drop like a lead brick or go somewhere we have only dreamed of seeing. But we thought you might like to know this info and frankly I was dying to tell you.

If for some reason you haven’t downloaded this issue the link is (http://www.carolinaarts.com/412/412carolinaarts.pdf). And if you would like to throw some stones of your own in the water – use that same link. You could be part of something historic.
Posted by COLIN QUASHIE ART at 8:19 AM