I know I promised that each Monday I would introduce a new artist (Triple-A Monday's) that was influential to my development - but I lied! It will be every other Monday. That way I don't exhaust my supply of artists. So check back next Monday for my inspirational art moment.

To ease your pain I will introduce some new art. I'm riding a creative wave right now and will be putting out a slew of new works over the coming months 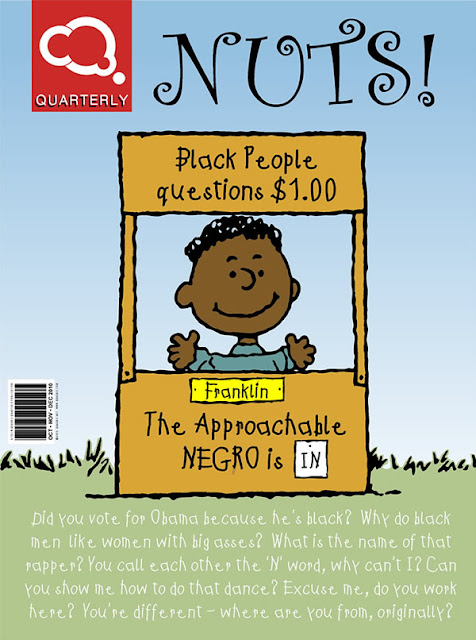 
This painting was inspired by a comment from a participant at the Innovation Institute, a creativity workshop I lead three or four times a year at McColl Center for Visual Art in Charlotte, NC.  The gentleman opened up about his frustration at being one of a few black employees in a leadership position at his company and as such, had to endure comments from whites who often regarded him as 'different' (from what exactly?). No sooner had he made this observation when the only other black person in the class of twelve (a black woman) chimed in with the same assessment and then went on to add that she felt as though were black America's press secretary. White co-workers and friends obviously had grown comfortable enough with her that they had unceremoniously bestowed upon her their highest contemporary award; 'the approachable Negro' - whose job by default is to patiently answer every idiotic and conceivable question they had about black people.

While they were venting I immediately conjured the image of Franklin, the only black resident (that I know of) in Charles Schultz cartoon world of 'Peanuts'. Pigpen may qualify but I have no confirmation on his racial status. I imagined Franklin exploiting his obvious priviledge for entrepreneurial gain by sub-leasing Lucy van Pelt's psychiatric booth and providing the residents with his PPV (Pay Per his View) service.

This is my third magazine cover painting, but the first issue of my new CQ Quarterly magazine. It's a concept that I've had for a long time and finally figured out how to accomplish it. Every three months I will produce a new cover issue dealing with a wide range of topics. My goal is to eventually offer paid subscriptions on a yearly basis (only 100) that will provide the subscriber with four high quality silkscreened prints annually. I'll wait until I have a few more completed before heading in that direction.

What I have always loved about this concept is that it allows me to exploit a variety of visual styles under one umbrella piece for continuity purposes. I can use photography, graphic design, traditional paintings, etc. on the cover and address anything that bobs up on my radar. I already have the January - March issue planned.
Posted by COLIN QUASHIE ART at 11:20 AM