I told you last week that even though 'Triple-A' stood for 'African-American Artist', I would not limit myself to that narrow scope. To underscore this point, this week I turn my focus on an artist operating out of Charleston (notice how I didn't call him a 'Charleston' artist), John Doyle. 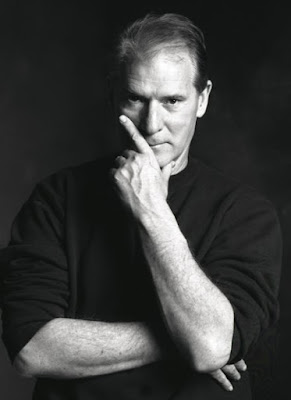 I was discharged from the Navy in late 1987 and wanted a career in art but had no clue how to proceed. I tried to get into advertising as an illustrator, but lacked a presentable portfolio to convince any art director to hire me. While working on trying to put one together and selling shoes part-time, I landed a full time gig in the frame shop of Tidwell Art Gallery on King Street. The job was eh, but it got my feet in the door, provided a great education about how galleries worked and allowed access to many, many artists. None of them would impress me more than John Carroll Doyle.

At that time John was painting these incredible sport fishing action scenes that graced the monthly covers of Sailfish Magazine. He would have the originals photographed and then bring the print in for me to drymount and apply a transparent overlay with the magazine title so the editor could see what the covers would look like. He would also have a few drawings and prints framed and shrink wrapped. Since his studio / apartment was two blocks away, I would always volunteer to bring the work by when it was ready. 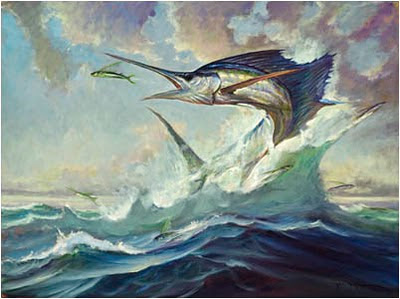 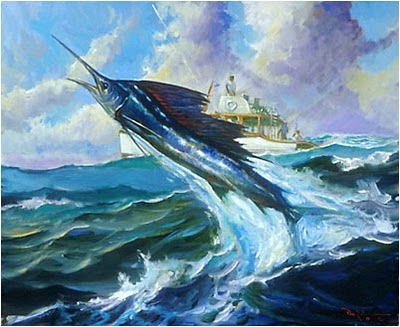 I used to enter John's studio like it was a sanctuary. It was a converted recording studio located on the third floor of a building on the corner of Wentworth and St. Philip Street. I literally prayed while standing at the street level entrance that he would ask me to come up instead of meeting me downstairs with a check in hand. Most artists are creative slobs and have studios that look like a tornado cleaned up after a hurricane - not John Doyle - his place always looked like he was awaiting a crew from Architectural Digest. It was nothing short of a sit-com set complete with huge originals, chic furniture and fresh cut flowers. It was the ultimate artist bachelor pad and I dreamed of one day having a place like that to call my own. He painted in a location just off the livingroom and I would make it a point to drift into the space to see what he was working on while he was in the back writing a check. He would offer something to drink and I always accepted because it meant I could spend more time there and ask him some questions. I was just starting to paint in acrylics and feared oils so any pointers he had about the medium was immediately seared into my brain.

What I admired about John more than his space, talent and career was his demeanor. He was mild-mannered and reserved but that hardly masked the gruff impatience lurking just below the surface. After five years of being in the military I saw it for what it was - mission objective. One minute with John and you knew that he didn't suffer fools and had no intentions on allowing anyone to waste his time, especially you. I liked that. He would hand over a check, thank me and offer a look that said, 'finish your drink so you can leave and I can get back to work.' The first time he tossed me out. The second time I rehearsed a slate of questions on the walk over to his studio. I think he could sense that I was not going to leave. I was prepared to wait him out like Kwai Chang Caine in front of the Shaolin Temple. He finally gave an annoyed sigh before yielding, "What do you want? I'll give you five minutes then you gotta go."

It can easily be said that a great artist is a gracious artist. They are confident and secure in their ability and therefore will freely give knowledge to anyone that wants it - but you gotta show them you want it. More than want, I needed it and John dispensed liberally. Five minutes would eventually turn into fifteen and sometimes thirty. He would show me how he mixed his palette and applied his paints (one neat trick was turning his canvases upside down to take the representational right brain out and let the left brain paint the light and shadow), tell me about his favorite artists (he was a huge proponent of the american impressionistic movement), and explain how they used light. He would give me books to read and most importantly, grill me about my art habits. One day I thought he was going to throw me out of a window when I told him I hadn't sketched or painted in a couple weeks."You think Magic Johnson goes a couple weeks without picking up a basketball? You'll never learn and get better unless you dedicate yourself to your craft!"

Eventually I left Tidwell and started my art career, but always returned to John for sage advice about any and everything from how to deal with clients to contracts. Though I know he's not aware of it or would even take credit for it if he were, the greatest gift he has ever bestowed upon me was to help shape my approach to art. During one particular visit, he seemed in a melancholy mood and opened up about his darker days in art when he would simply paint and sell art just for the money to fuel his habits. "There are people that own art with my name on it that I would buy back if I could. Promise me that you will never, ever sell anything to anyone that you wouldn't keep for yourself." I have kept that promise and taken it to heart. To this day I am known for my reluctance to sell my art. I've destroyed more than I've kept and it hurts to part with a piece unless I know it's going to a good home. Thanks, John.

A recurring visual in John's work is that of black people. What amazed me about his portrayal of blacks was the effortless neutrality. He makes no apparent visual statement about them, nor does he make any assumptions about their perceived condition, rather, he simply locates them in their own milieu and gives them the rare opportunity to showcase their humanity to the viewer. There are many white artists whose paintings of blacks are often infused with a level of nostalgic condescension. The struggle to properly present in full what they know little of in passing often impeaches their stated credibility and creates a visceral distance between artist and subject that cannot be conquered with technique - only respect. The first piece of his that I saw with black subjects was based on the coastal fishing fleets and I remember how much care and admiration emanated from the canvas. His blues and jazz series often times used local models and have become a mainstay of many night spots across the nation. 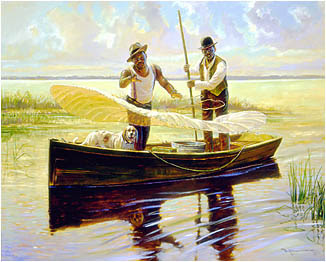 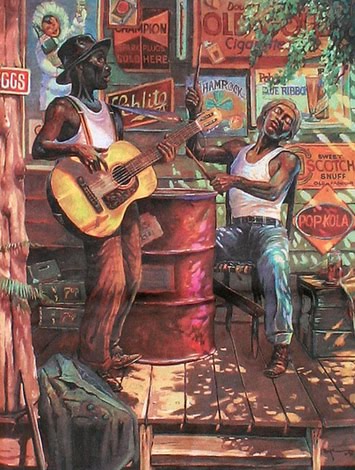 Because of the way John's treated me I've made it a point to never turn any artist down that seeks my advice or wants to spend some time and talk art. Like him, I'll know if you're serious or not and if I feel you're wasting my time I will quickly send you on your way. I used to feel as though it was my responsibility to give something back, but that's not really it. In the end I'm not giving anything to anyone - just returning what I borrowed a long time ago - it wasn't mine to keep.

I think it was around 1992 that I interviewed John for a newspaper article. He was recovering from a heart attack and I remember being moved by his honesty and openness about the emotional toll the near death experience had taken. The fierce intensity that I once knew was modulating into a more reflective persona that just 'wanted to paint the beauty around me.' For those that want to see some of the beauty he continues to create, the John Carroll Doyle studio is located at 125 Church Street in Charleston. To see more of his art and contact him, click on this link: John Carroll Doyle Art - or make it a point to drop by and spend some time with him - just make sure you have your questions ready and try not to waste his time!
Posted by COLIN QUASHIE ART at 7:59 PM