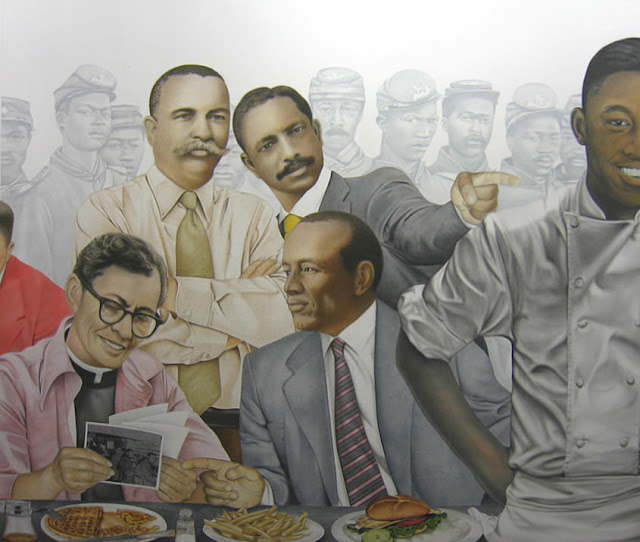 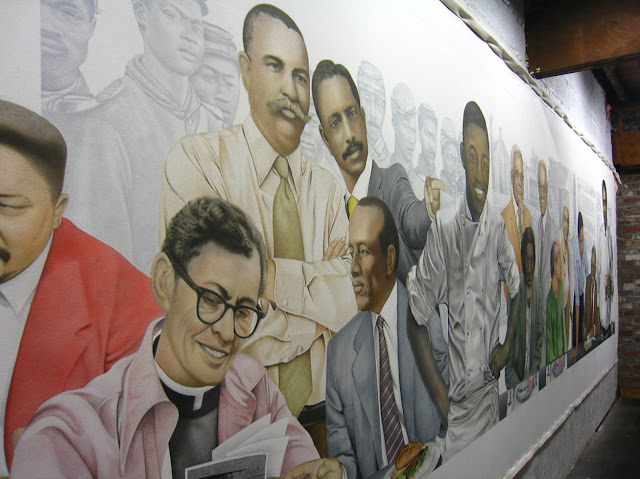 This background panel is a salute to colored union troops. The particular regiment shown is a division of Gen, Charles Paine's 4th USCT. The 27th regiment under his command played a prominent role in the capture of Wilmington in February 1865, after which, they constituted the vanguard of the Union's march on Wilmington.

Another reason I decided to place colored troops in this frame is because of the presence of James B. Young in the foreground. During the Spanish-American war, states were asked to organize regiments of volunteers. When President McKinley called for volunteers in April 1898, African Americans in Wilmington, New Bern, Raleigh, Charlotte, and Asheville quickly organized into companies and offered their services to Governor Daniel L. Russell. Russell had been elected governor in 1896 on a fusion ticket, supported by both Populists and Republicans and with nearly all of the black vote. Recognizing his debt to black voters, Russell agreed to create an all-black volunteer regiment. To command the regiment he commissioned James H. Young, the African American editor of the Raleigh Gazette and a former state representative who had been instrumental in founding a state school for the deaf, dumb, and blind.

North Carolina was one of only three states to create an all-black regiment commanded by black officers. Across the U.S., the black press praised the state and its Third Regiment.

One more background to complete.
Posted by COLIN QUASHIE ART at 9:38 AM