5 of the 8 background panels are now complete! The detailed imagery of the fishing fleet has me cross-eyed for the moment but now that it's done, we move onto a street scene that will prove equally as detailed but I suspect will be easier to accomplish. Now for today's North Carolina history lesson on the fleet of Menhaden Chanteymen. 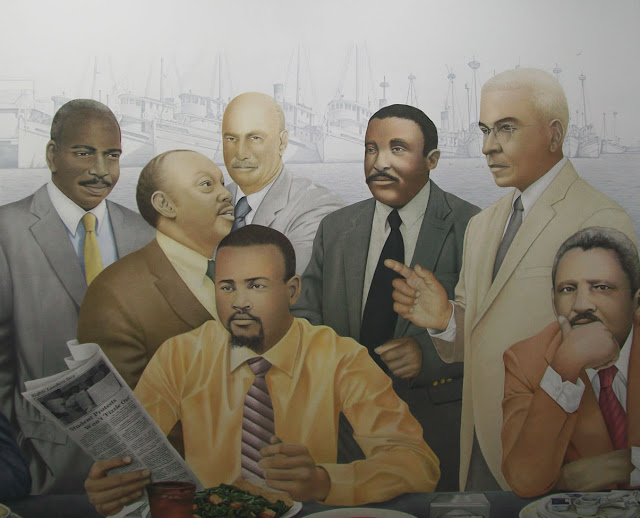 Beaufort, NC is the menhaden capital of the world. Local menhaden companies once provided hundreds of jobs in Beaufort and surrounding areas with numerous factories and vessels, including dozens of steamers that came from Virginia to work the lucrative fall fishery. Grocery stores, hardware stories, gasoline docks, and department stores all benefited from the influx of people and money during menhaden’s fall fishing.  The smell of “shad” cooking on Lennoxville Road was recognized throughout Carteret County as the smell of money that was an important part of this county’s commercial fishing industry.

Menhaden fishing was also a part of the culture and community that has not been forgotten locally.
For more than a century, folklorists and ballad hunters have mined the North Carolina mountains for folksongs and traditional crafts, virtually unaware that such treasures could be found in abundance along the watery byways of the coast. Many of the richest folk traditions in the state are associated with maritime occupations, or "working the water," as people say.

In the town of Beaufort, in Carteret County, commercial fishing enterprises have long operated fleets to net huge catches of menhaden, or shad fish, as they're more commonly called by the local fishermen. In processing facilities along the water, the fish are converted to a remarkable variety of uses, from feeds and fertilizers to paints and perfumes.

The ship-board crews employed by the fisheries have been predominantly black over the years, and the work assigned to them has been physically demanding. Menhaden are caught by quickly encircling large schools of fish in two small "purse" boats, which surround the fish with their nets. This purse seine must be pulled tight or "hardened," drawing it in from the bottom in order to capture the fish and lift them to the surface of the water. A special "scoop" net then brings the catch to the hold of the main fishing vessel. Since the mid-1950s, this work has been performed with the aid of hydraulic winches and lifters; prior to this time it was done by hand. As it was not uncommon for a catch to exceed 100,000 fish, hardening the net required great strength and coordination on the part of the crew.


To help ease and pace this extraordinary labor, the men sang "chanteys" or worksongs. Generally a leader would sing out the first line of the song by himself, to be answered with another line sung in harmony by the rest of the crew. The songs or lines were drawn from many sources, including hymns and gospel songs, blues, and barbershop quartet songs, and were often improvised.

Folklorists Michael and Debbie Luster, hired by the North Carolina Arts Council in 1988 to survey the folk culture of Carteret County, were fascinated by what they'd heard of the chantey-singing tradition. They arranged a gathering of about a dozen retired fishermen, hoping that a few might be able to recall verses or even perform some of the old songs. Though they had not sung together in more than thirty years, the singers found their parts with ease. The lines were recollected almost effortlessly when they began to pantomime the action of working the net.

The great success of the venture persuaded the men to accept an invitation to perform in public at an event sponsored by the North Carolina Maritime Museum, in Beaufort. This reunion concert brought misty eyes to the audience and singers alike, and renewed the pride of the community in these beautiful sounds that once rolled across the water.

Since that memorable occasion, the Menhaden Chanteymen, as they like to be called now, have been constantly in the public eye. They have performed for the North Carolina General Assembly and the National Council on the Arts, appeared at Carnegie Hall, and have been featured on national television and radio. And every Friday night they gather at the parish house of St. Stephen's Congregational Church in Beaufort to sing for themselves and to share the fellowship wrought by decades of rugged camaraderie at sea. 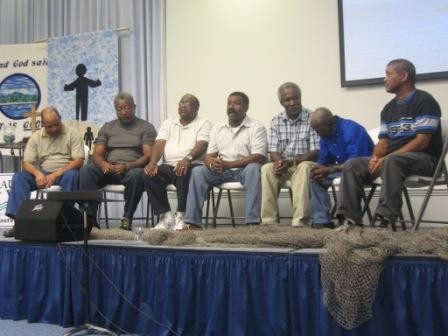