The studio is finally ready! I rented it on the first of the month and immediately went about the business of making it ready for art. I installed 13 sheets of OSB on the main cinder block wall and painted it white. Now I have a surface that I can staple the linen to. While working in the space I realized what a godsend it was. The height of the lowest beams and the panels are eight feet, which is the exact height of the ceiling in the location where the painting will hang. The wall is exactly 53' long, which works out to five feet longer than the finished painting is supposed to be. I had electricity turned on but there was already a security system in place (no fire alarm however, waiting on the rep to come by today to have that installed - need it for the insurance policy). I also went to have the water turned on, only to find out that it was already flowing. The bathroom was filthy but after a lengthy clean up, everything works fine. I even have access to wifi from the business below! I set up a speaker system so I can have music, news and my audiobooks to pass the time with. In essence, it's home away from home. I also forgot to mention that the location is five blocks from the house! I can walk to work. Nice, huh? This will help when the dog days of art hit (and they will). Just after the halfway point when you can see the end but it's too far to touch. The space will help ease that anxiety. I've told myself to enjoy this because there may never be another. It will outlive me and therefore take joy and pride in each brushstroke because when it's done...it's done, so let the good times roll. 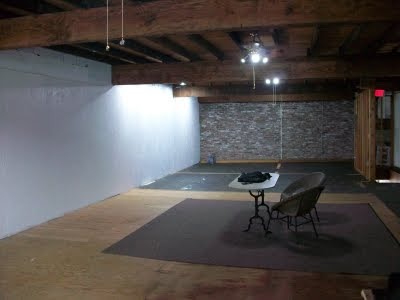 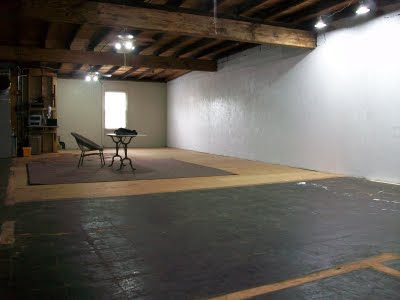 I also had a meeting this morning with Nick Smith. He's a local arts writer, but having him write an article wasn't my motive. He's also a arts videographer that shot and edited a short film on an exhibition at the Gibbes Museum of Art by Juan Logan and Susan Harbage-Page called "Prop Master". I want this painting documented, but I will have no time (or editorial distance) to do it myself. I shot him an email about the project and he is all over it. I told him that I wanted no real input in his project, what he creates, he creates. The only stipulation is that UNC has to get a few copies and be able to use them to publicize the project. The copyright will remain his and his alone. He agreed and will set up shop the moment the linen arrives and I begin installation.

Posted by COLIN QUASHIE ART at 9:56 AM